Following the reception of the inaugural Africa Publishing Innovation Fund from The Dubai Cares initiative, Okadabooks embarked on the Write The Future project (#WTFDC). This project done in partnership with Teach for Nigeria (TFN) aims to further drive literacy by giving teachers, students, and parents free access to books their children can relate to, via mobile devices, which are widespread and affordable. To achieve this aim, seasoned and award-winning writers were commissioned to write children’s stories. These stories are written in simple English, with emphasis on local and cultural terms unique to Nigerian students in rural areas, and with strong themes that challenge cultural, gender, and racial stereotypes.

Read on to know more about these amazing writers who’re instrumental to the success of this project.

Olusayo Ajetunmobi is a Fine Artist, Visual Storyteller, and Illustrator. She enjoys making children’s books and has illustrated over a dozen of them in such a short time. Her visual art practice focuses on self-discovery as it pertains to exploring, destigmatizing, and decolonizing African stories, history, and culture. Her work creates a paradigm shift in the way Africans and women navigate reality. She is enamored with folklore and to make up for the lost folktales, she has gone on to craft new ones. Ajetunmobi aims to explore, destigmatize, and decolonize African stories and culture through her folktales and art. She was an Artist in residence at Akada Children’s Book Festival and Ake Book and Arts Festival. The Greedy Ostrich is her debut as an Author-illustrator.

Aduke Gomez is a Nigerian-Brazillian lawyer, poet, and cultural enthusiast, who has garnered a lot of experience working for several high-profile corporations across several fields in Nigeria. Aduke was recently able to combine her interest in Nigerian history with her work as Consulting Producer on the acclaimed Quramo Productions documentary on a history of Nigeria – “Journey Of An African Colony”. Aduke’s published collection of poems was featured as a festival book for both the Lagos Book and Art Festival 2017 and the Ake Festival 2017. Her children’s book “Lost And Found In Lagos” – a collaboration with Biola Alabi Media was selected as one of Channels TV Book Club Top Twenty Books for 2019. Her new poetry collection “Attending My Own Wake & Other Episodes” was published by Bookcraft Africa in March 2021 and will be featured at the 2021 Goethe Institut Digital Conference on Mental Health and Art Therapy.

Elnathan John is a novelist, satirist, and lawyer, who is the author of four books. His short stories were shortlisted for the Caine Prize for African Writing in 2013 and 2015. His novel, Born on a Tuesday — translated into German and French — won a Betty Trask Award and the Prix Les Afriques. His satire collection Be(com)ing Nigerian, was published to critical acclaim in 2019. His research interests include religion, politics, and cosmology in contemporary and pre-colonial Nigeria as well as translation. His writing has been published in Per Contra, ZAM Magazine, Hazlitt, Evergreen Review, and Chimurenga’s The Chronic, and elsewhere.

Read Elnathan John’s Write The Future entry, Houses in the Sand on the OkadaBooks mobile app for free HERE.

Ugo Anidi began her writing career in primary school, where she wrote and illustrated chapter books and sold them to her classmates. Her head basically floats around in the clouds except when she has to act as a referee between her sons and/or work as Regional Advisor of the Nigerian chapter of the Society for Children’s Book Writers and Illustrators (SCBWI). She is currently an MFA student of the Writing for Children and Young Adults Program at the Vermont College of Fine Arts. Ugo Anidi reads, writes, and reviews loads of Children’s books on her blog, where she also teaches a magical course on writing picture books! She shares her home in Lagos, Nigeria with her husband, three sons, 500 books, and the characters in her head. In her “other” life,  she is a lecturer in law at the University of Nigeria and she plays a mean game of scrabble.

Read Ugo Anidi’s Write The Future entry, I Want a Pig on the OkadaBooks mobile app for free HERE.

Recommended Reading  Article - Self-Awareness: A Necessity For Growth And Change

Yejide Kilanko is a Nigerian-Canadian writer and social worker. She writes poetry, short fiction, children’s books, and novels. She was born in Ibadan, a sprawling university city in southwestern Nigeria. She read just about anything she could lay her hands on and that love for reading led her to poetry-writing when she was twelve. It was the best way she made sense of the long, angst-filled teenage and young adult years that followed. Kilanko’s debut novel, Daughters Who Walk This Path (2012), a Canadian national bestseller, was longlisted for the inaugural Etisalat Prize and the Nigeria Literature Prize. Her work includes a novella, Chasing Butterflies (2015), and a children’s picture book, There Is An Elephant In My Wardrobe (2018). Her short fiction is included in the anthology, New Orleans Review 2017: The African Literary Hustle. Kilanko lives in Chatham, Ontario where she practices as a therapist in children’s mental health.

Read Yejide Kilanko’s Write The Future entry, What The Eyes See on the OkadaBooks mobile app for free HERE.

Chika Unigwe is a Nigerian-born Igbo author who writes in English and Dutch. She holds a Ph.D. from the University of Leiden, Holland, and is the author of four well-received novels, including On Black Sisters Street and Night Dancer. Her short stories and essays have appeared in various journals including The New York Times, The Guardian, Aeon, Wasafiri, Transition, Guernica, Agni, and The Kenyon Review. Her works have been translated into many languages including German, Polish, Hebrew, Italian, Hungarian, Spanish and Dutch. A recipient of several awards, she sat on the jury of the 2017 Man Booker International Award and is the director of Awele Creative Trust, an NGO she set up to encourage creative writing among young Nigerians.

Read Chika Unigwe’s Write The Future entry, Ugo Gets Her Wish on the OkadaBooks mobile app for free HERE.

Abubakar Adam Ibrahim is a Nigerian creative writer and journalist. His debut short story collection The Whispering Trees (Parresia Publishers, 2012) was long-listed for the Etisalat Prize for Literature in 2014. The title story was shortlisted for the prestigious Caine Prize for African Writing in 2013. Ibrahim has won the BBC African Performance Prize and the Amatu Braide Prize for Prose. He is a Gabriel Garcia Marquez Fellow (2013) and a Civitella Ranieri Fellow (2015). He was listed by the Hay Festival in the Africa39 list of the most promising sub-Sahara African writers under the age of 40. He judged the Writivism Short Story Prize in 2014 and was a judge for the Short Story Day Africa Prize and the Etisalat Flash Fiction Prize in 2015. He was described by German broadcaster Deutsche Welle as a northern Nigerian “literary provocateur” amidst the international acclaim his award-winning novel Season of Crimson Blossoms received in 2016.

Read Abubakar Adam Ibrahim’s Write The Future entry, The Girl With The Magic Spanner on the OkadaBooks mobile app for free HERE.

Sope Martins was born in Lagos and raised in London. She is a linguist, travel enthusiast, writer, and the author of the children’s book The Greatest Animal in the Jungle. Sope has built a career as a media personality on radio & television and writes for both media as well. Sope is well known for her eloquent, articulate, and precise presentation skills, her trademark dry wit serves her well on the various shows she anchors (The Breakfast Show and Book Review Show). One reason we love Sope Martins is for this philosophy – In a world that is filled with Bankers, engineers, and doctors, Sope considers writing as bravery.

See the aims of the Write The Future project HERE.

Listen to the Write The Future stories audiobooks HERE. 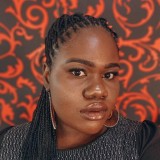